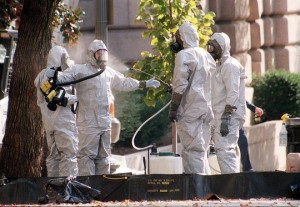 “The Trump administration has quietly dismantled or cut back multiple programs that were created after the Sept. 11, 2001, attacks to help detect and prevent terrorism involving weapons of mass destruction, a Times investigation has found. The retreat has taken place over the last two years at the Department of Homeland Security, which has primary domestic responsibility for helping authorities identify and block potential chemical, biological, radiological and nuclear threats. The changes, not previously reported, were made without rigorous review of potential security vulnerabilities, The Times found, undermining government-wide efforts aimed at countering terrorist attacks involving unconventional weapons, known as WMD. More than 30 current and former Homeland Security employees and contractors voiced concern that the changes — including the cancellation of dozens of training exercises and the departure of scores of scientists and policy experts — have put Americans at greater risk.”